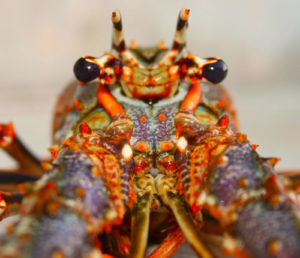 In addition to bag limits, there is also a size requirement. A lobster must be at least 3 inches in length from the hard part of the forward edge between the rostral horns to the rear edge of the carapace. No lobster should ever be placed in a bag or taken out of the water unless it has first been measured and is of legal size. You should always verify what the current legal size of a lobster is before you go.

Every July the coastal areas of Florida are flooded with lobster hunters trying to get their share of this year’s bounty when the official mini lobster season kicks off. There are two Florida Lobster Seasons, the 2 day mini season and the 8 month regular lobster season. The mini lobster season is always the last consecutive Wednesday and Thursday in July. This year the mini season falls on July 29th and 30th. Make sure to always verify dates and regulations withFlorida Fish and WildlifeIt begins at 12:01 am on Wednesday and ends at 12:00 midnight on Thursday.

The regular 8 month lobster season is always August 6 through March 31.

Types of Lobsters The main difference in types of lobsters can be seen by the claws or pinchers. The American or Maine Lobster has large front claws while the Florida Spiny Lobster does not. The clawed lobsters are often called cold water lobsters due to their normal habitat locations. The spiny, rock, or Florida lobster is generally considered a warm water lobster. The Florida Lobsters are most commonly caught for their tail meat, while the Maine lobster is known for it’s claw and tail meat.

Baby Lobsters The female Florida lobster holds up to a million eggs during the reproductive season of 9-10 weeks. The eggs begin soft in texture and bright orange in color. As the eggs mature, their color darkens and the eggs become hard. Young larvae and juvenile lobster stay in shallow waters to hide from predators. One of the most common predators of the Florida lobster is the Lionfish. The Lionfish can consume over 20 small baby lobsters or wrasses in a 30 minute timeframe. As the lobster growth, so do their predators. Example of Adult lobster predators are eels and sharks.

Lobster Migration As the small lobsters grow, they will migrate to deeper water. Lobsters also migrate during the year as the water temperatures change. Generally in the fall the lobsters will do to deeper water to avoid the cold shallow water. In the spring as the shallow water warms, the lobsters return. Storms are often a cause for migration as well. It is speculated that tropical and winter storms are a strong factor in lobster populations and habitats. Scientists have written about how the Florida spiny lobster is a descendant of the Caribbean Spiny lobster due to large water circulation patterns and weather patterns transporting the lobster larvae long distances.

Lobster Coloring and Feeding Spiny lobsters generally eat at night, preying on small slow-moving species such as smaller crustaceans, mollusks, chiton and bivalves. Lobster coloring is highly determined by the foods they eat. The prey that the lobsters eat is often covered in algae and the color of the algae differs with the depth of the water. Green alga is more common is shallow waters and therefore lobsters in shallow water tend to be more green than red. Red alga is more common in deep water, giving deep water lobsters a redder tint in their shells

Your 5-Day Forecast at a Glance